As asked, my son has been getting very plain lunches lately.  I haven't posted them because they started to look the same.   Usually a sandwich, applesauce or yogurt, cheddar bunny's and an apple.  No fancy cutting or anything.  I think he's been missing his special lunches a bit.  As soon as his new lunchbox arrived today, he asked if he could get a santa hat sandwich like his sister did yesterday.
I was so thrilled that I threw in lights and a snowman too!

Actually, the lights were planned for my daughter's lunch tomorrow but her class earned a pizza party so we were told not to bring lunch. 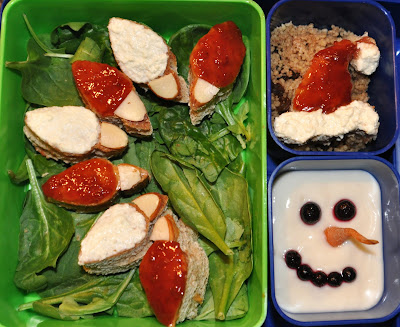 The lights and santa hat are just peanut butter and jelly and plain cream cheese sandwiches.  the lights have almond halves at the bottom.  I wish I had a black licorice string to be the wire, but oh well.   The lights are on a bed of lettuce.  The santa hat is sitting on top of sweet couscous (raisins and cinnamon added to couscous).  The snowman is vanilla yogurt with frozen blueberries for eyes and mouth and a carrot nose.
Posted by amanda at 8:17 PM