a lot less lunches for the limbo.

After a week off of school for Thanksgiving break, I forgot to make lunch last night.  So, this morning I threw a bunch of stuff into the lunchbag.   My son went to school with a 'regular lunch' (as he calls it).  He had a pb&J in a plastic baggie, a prepackaged organic applesauce, annies bunnies in a bag, and some cheese and crackers thrown into a plastic baggie.

He likes the regular lunch.  I've known this all along... I've just tried to fight it.

With his laptop lunchbox still missing (and most likely gone for good), I find myself at a crossroads.  Who knew I would put so much thought into lunchboxes.  really.  who stresses over this?

I declared not long ago that I was going to buy a new laptop lunchbox, but I am not so sure.  The kids go straight out to recess after lunch, with many other classes and a few grade overlaps.  He still seems to think someone else picked his up by mistake - really?  I highly doubt someone else has an electric blue/green alien lunchbox, and if so, wouldn't there have been a duplicate remaining in the lunchbox pile by the door?

Knowing he prefers 'regular lunches' over the laptop, I flat out asked the accusatory question - "did you lose it on purpose?"  he swears up and down he did not.  I do believe him.  He has always been a kid who is super easy to break.  He would have cracked by now if he had anything to do with the mysterious disappearance.

So, that brings me to this super tiny in the grand scheme of things, yet stressful to my little life, decision.  Shell out $50 for a new system  (lost the silverware, the water bottle, a few containers including one of our  killer awesome large inner containers that is only sold in the separate 'buddy' kit which tacks another $12 onto the system total)
OR, knowing he likes a 'regular lunch', meet him in the middle and just use some of the remaining laptop lunch containers mixed with whateverr tupperware and the occasional baggie or prepackaged item and hodgepodge it into his old (current) lunchbag.

Considering we've had his laptop lunchbox for about three months, I just can't see shelling out that much money when he could possibly lose it again.

so.... that is where I am at:  He is going to still be getting healthy lunches with minimal packaging, but they will just be more 'regular' in format.  I won't use all prepackaged, processed or so much plastic baggies as I did for today's lunch, but they just are not going to be as fancy, creative or decorative since I am limited to use random containers and will have to use some plastic bags just to be able to fit it all into the lunchbag as the bulky containers make arranging enough food, plus a drink difficult!  Being that I have to cram it all together, it just doesn't make sense that I spend so much time on making them look 'pretty'.

My daughter on the other hand is at a preschool where there is pretty much no possible way her lunch could get lost in the shuffle.  So, you most likely will only be seeing her lunches from here on out.   It will be less often as she only goes to school two days a week.

Here is her lunch for tomorrow... 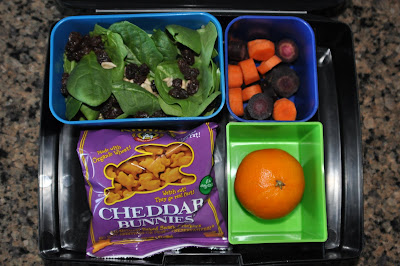 A spinach salad with raisins and seeds, cheddar bunnies, small orange, black and orange carrots slices.
After the picture, I added salad dressing and cut into the orange so she can peel it easily.
Posted by amanda at 5:07 PM