A dinosaur quesadilla on top of a bed of lettuce.   I used some of the scrap tortilla dough and ran it through a dinosaur punch I had before cooking.  Seeing the pic, I wish I cut the edges a little straighter, but I was doing 50 bajillion 'mom' things at once during the making of this lunch.

I was going for a 'dinosaur egg' with the larger kiwi.  It looked more like a dinosaur egg (from a side view) before I peeled the brown outside off  - would have like to have kept that on there for aesthetics, but practicality won cause I knew the boy would not be able to peel it so easily at school tomorrow - so it kinds looks more like a flower (?) oh well.  Carrots and blue cheese dip round out this lunch. 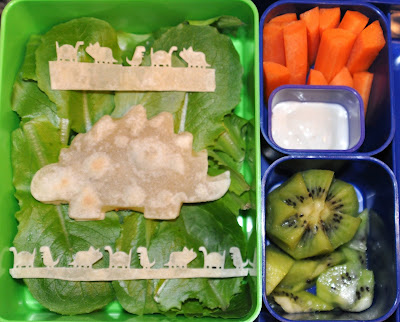 after the pic was taken, my son decided he wanted shredded cheese and almond slices on his salad - so those were added.
Posted by amanda at 7:33 PM