We were starting to run low of a lot of items from Costco.  There are a few things where the bulk organic version just comes out to be sooo much cheaper in the long run from Costco than at the regular stores.
In many cases, buying smaller packages of an item from a grocery store and using multiple coupons is the way to go.... but not so much with the organics.   Either there just are not multiple coupons available or there just are not coupons available for certain brands at all.  That is 4 pounds of organic raisins (behind the bread loaves).  Buying organic raisins in small packages at the store would end up being almost double the price.


The costco trip pictures always crack me up.  Everything is so big but when placed together they look average size.  That is a 10 pound bag of carrots (for $6!!)  And the organic veggie bags were huge, but next to everything else, they don't look so large. 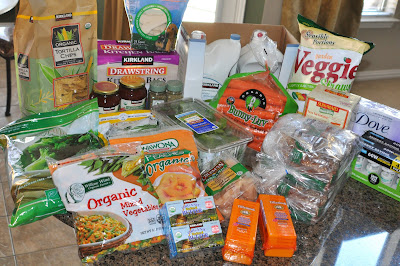 Even though I had already spent the weekly budget (and then some) at costco, I still went to Kroger and Central Market and loaded up there too.  I should be able to finish out the rest of the month by spending very little - dairy and produce only. 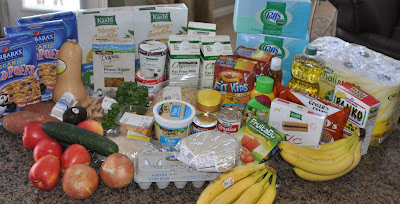 The barbara's cereals, country choice fit kids oatmeal, and fruitabu were all on closeout and were half price at Kroger.  Central Market sells their half gallons of milk 3 for $5 on Monday only.  That comes out to be 1 1/2 gallons for $5.  Great for Organic milk.  I bought three shampoos all marked down and with coupons.  They were each under $1.  I have not gone all organic on health and beauty items yet.  As for the toilet paper, the coupon says free roll of paper towels OR $1 off any other product.  I even TOLD the checker it is just $1 off and she still took off the full amount - $6.99!

close ups of the same trip - (where did that ice cream come from?) 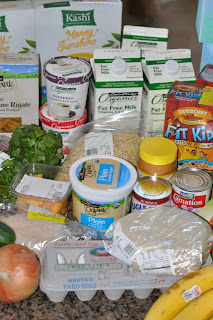 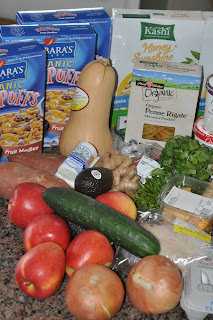 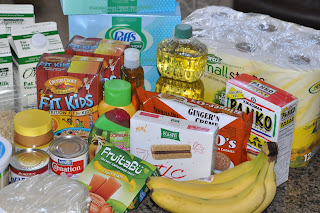