Tonight was one of those nights 'screw it, I wanted to just grab the prepackaged stuff' kinda nights.  BUT, I didn't.  I worked all day, ran some errands after work, was tired, blah blah blah...  My biggest problem... I had not devised a plan AHEAD OF TIME for lunches tomorrow. So, after dinner I scavenged the fridge and internet and came up with this... 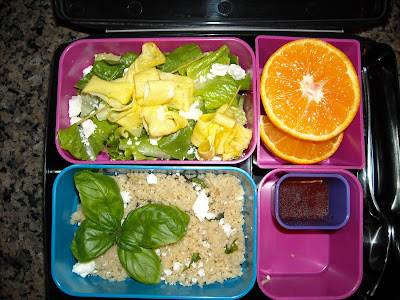 Found a recipe for couscous I wanted to try. I did a variation of this recipe here but left out the green onions and PICKED out the sundried tomatoes for my son's lunch (he says they are 'super nasty'). I made plenty of this dish for my husband and I to have for lunch tomorrow as well.   The lettuce received a nice feta topping.  My son recently announced that he loves feta cheese so I am taking full advantage!! (notice there is a little feta on the couscous too?!?!)   I'll put it on anything if it will make him like it!  The orange is... well, an orange.  And the egg pom poms are something I stumbled across online here and told my son I would try once we had eggs again... well, my husband picked some up last night and my son has the memory of a.... well, i forget.  But whatever animal it is that has a really good memory! so, since he finished all his homework, he helped me make the egg pom poms.
*** disclaimer.... I know the basil sprig looks rather shi-shi, but I have a garden with a lot of basil in it so I had plenty to spare.  I reserve the right to go as shi-shi as I want, lol! And anyways, It needed something after I picked out all the sundried tomoto.
Posted by amanda at 8:51 PM